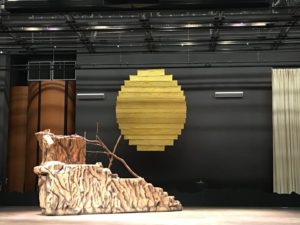 Recently, I was given the task of building the rising sun from The Lion King Jr. and soon realized it was no small undertaking, since I do not have a counterweight system in my space. First I had to work out how to make small-scale counterweight line-set and how to make it work with what resources I had. I sat down and pulled out some of my trusty rigging books including The Stage Rigging Handbook by Jay O. Glerum, Stage scenery: Its Construction and Rigging by A. S Gillette and The Backstage Handbook: An Illustrated Almanac of Technical Information by Paul Carter. I also used another older theatrical book I will add later. I also decided on using 1/16″ aircraft cable (rated to 480″ BS) using stops and small washers for each hole. I had a total of 52 holes and stops to crimp.

I also had to work out what to make the sun out  of and considered  3/4″ PVC piping , 3/4″ plywood, and 1×4 pine , but all of them were too flexible, not straight enough or could not handle the weights which would be imposed on them. After talking to a few other designers and carpenters, I decided on a product called  lumber lamb and got it from Webber Plywood. Lumber lam is a ply wood which is made with alternating grains and is a very straight and square product. The strength of it is also considerably higher than the other ideas I had. The original fabric used in the broadway production was a silk like product according to their education series on youtube.

The fabric I used was not as silky and probably not as good as the original, but we were on a budget and were able to get it for a dollar a yard( Los Angles fabric district). If you know anything about fabric, this was an amazing deal and it worked very well for our needs. In the image below you can see that it had a bit of a shimmer and was easy to cut in a semi straight line, so it made things much easier. 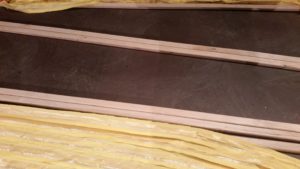 Once I worked out how I was going to rig it all up, I had to  figure out what scale I was going to use. I have a smaller space than the original production, so I had to work out the best size for mine. After looking at several source images and since I was working with middle school students, I decided  a 5′ radius or a 10′ sun would be adequate for my space. Now I needed to work out how long each individual slat would be, the height thickness of each, and how far apart each one should be. Vectorworks to the rescue. I drafted a virtual 3D version of it and was able to quickly work out measurements, layout and the overall look in a few hours. I was even able to figure out where the holes should be drilled into each piece.

Now onto the construction of the whole thing. I first had to rip each lumber lamb piece I bought into 1 1/2″ strips. It only comes in 1X3 or 1X4 width by 16′ long pieces unfortunately, so I had to order more than I originally first figured out using a sheet of plywood. Once I cut two of each size including one at 10′, I created a jig to drill all the holes in the center of each piece and another jig for spacing them out later. This way I could be more precise with the placement of both. I then rounded off all the edges using a router with a round over bit and started the long process of cutting the fabric onto strips then stapling them to each slat. I also had to use an ice pick to punch holes through the fabric where the cable would later run through each. The photos below were setting up the spacing between each slat and stapling the fabric pieces on. 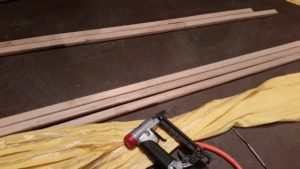 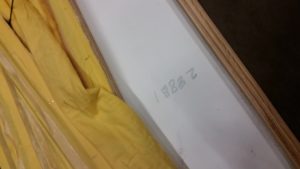 Once that was all done I needed to start running cable through each slat and adding copper cable stops with small washers on top of each. Thank goodness I numbered each one as I cut them to size earlier, otherwise this would have been much harder. Using the zig I made which was 8″ wide, I was able to mark where each stop was going to be crimped with the swag tool. Next came the tedious task of crimping each in place. This would have been much easier with a right-angled swag tool, but I made do.

The overall design came out pretty well, but I did think of a few things that would have made it better.

This site uses Akismet to reduce spam. Learn how your comment data is processed.